Why is live theatre so disappointing?

Once upon a time, I was a true, die-hard, theatre aficionado.  I enjoyed the theatre so much that I even got degrees in it before going to library school and becoming a librarian.  Since I was a teenager, I would anticipate each year’s Tony Awards the way other people look forward to the Superbowl, the World Series, the Oscars, Christmas, you name it.  In recent years, though, I’m having a difficult time stomaching the Tonys, and this year was no exception.

When I watched the Tony broadcast last Sunday, I was frankly repelled by how the theatre, particularly Broadway theatre, is being taken over by Hollywood.  Not only are a number of “new” musicals actually musicalized versions of popular movies, but there are also so many movie stars performing in them.  Years ago, when established film actors began to act on the Great White Way, I naively thought it would bring more attention to legitimate theatre.  What I didn’t expect was audiences going to the theatre to see “the name” rather than the theatrical piece.  This is one of the reasons why Broadway has become more of a tourist attraction these days.

Another element that turns me off from live theatre these days is the fact that’s it’s not really “live” anymore.  I have nothing against technology and accept that it makes things run easier and more efficiently in the theatre, but when you have large TV screens on the stage, what’s the sense of having live actors anymore?  Last December, I was sorely disappointed by The Radio City Music Hall Christmas Spectacular in New York.  To have half the show comprised of a 3D movie was preposterous and a waste of 75 dollars (for the first balcony, no less).  I’d like to think there would be a riot if the Rockettes’ tin soldier number was eliminated, but I can’t be too sure.

What makes theatre so special and different from film is that it’s live.  It’s about sharing the experience with other people in the audience and with the actors performing on the stage.  It’s about witnessing the creativity of people, seeing what they can do within the limitations of the 3 walls of the stage and the imaginary “4th wall” between the actors and the audience.  Most of all, however, it’s about expressing and experiencing our humanity at its core, through communication and storytelling.  Maybe it’s time for a return to Jerzy Grotowski‘s idea of a “poor theatre.”  Why can’t the theatre simply return to its roots and emphasize its most important attribute of being live, not to mention bring the cost of tickets down? 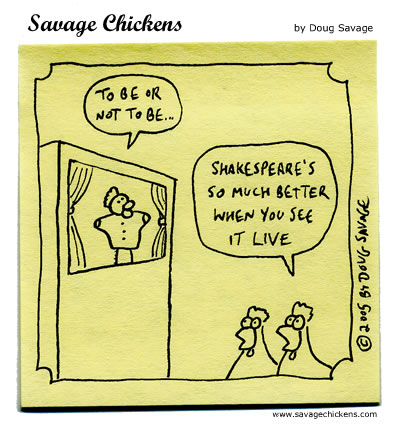