Why is it hard to find a better toilet paper?

It seems like toilet paper is a topic that keeps creeping up (literally or otherwise).  Sometimes it’s about who gets to put the new roll up or whether you’re an “over-believer” or “under-believer.”  This time, however, it’s about finding a better toilet paper.

I’m sure many if not most of us are as loyal to a particular brand of toilet paper as we are to our favorite sports teams.  For instance, my grandmother, a product of the Great Depression, never used anything but Scott because it’s cheap and you get a lot of it (the downside: you have to use more of it since it’s so thin).  My mother, having grown up in the Communist Bloc with its infamous sandpaper-like toilet paper (if you were lucky to get it at all), goes for the squeezably soft Charmin.  Quite naturally, thanks to my mother, I became a Charmin disciple.  That is, until now.

For years I’ve been using the Charmin Mega Roll, the one that you get in Wal-Mart, until I got my shiny new Costco card and started getting Charmin in bulk for a better price.  Well, I found out that not all Charmin toilet paper is the same, especially when I started noticing…ahem…lint in places where there shouldn’t be lint.  Not a very good thing, I can assure you.  After looking at various websites, I at least feel better that I’m not the only one who has encountered this problem.

So now I’m testing out Costco’s Kirkland brand of toilet paper.  It’s an improvement over the Costco Charmin (in other words, less lint), but further testing is required in order to establish the consistency of its performance over time.  If you ask me, I think there should be a standard rating system for toilet paper just like the one that’s in place for toothbrushes.  Regulations are needed for which toilet paper can qualify as soft, strong, and NL (non-linting).  Why can’t there be some toilet paper advisory council that sets standards and requires toilet paper manufacturers to display their rating on the front of packages? 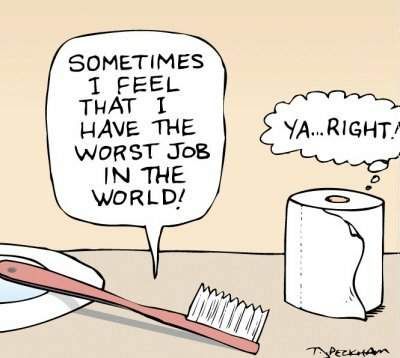