Why do we have the ongoing debate over whether the toilet paper roll goes “over” or “under”?

Now that we’ve addressed the issue of replacing the toilet paper roll, it’s time to talk details and get nitpicky.  When it comes to how the toilet paper roll should go on the holder, people are as divided on toilet paper orientation as they are on presidential politics.  Even my boyfriend and I are split on the matter, he being an “over-believer” while I’m an “under-believer.”  Our deliberations have been rather civil to date, but I’m hoping they won’t escalate to the point where we’ll need bathrooms that are strictly his and hers.

At what point did we all get so passionate about the “over-under” matter?  Those on both sides of the tissue make good arguments in support of their positions.  The over-believers feel their position is the right one because their way is the way of the hotels, the way in which the flapping sheet can be folded daintily, and the way that displays any decorative imprints on the paper clearly.  The under-believers, however, see that their position is the right one because the toilet paper is easier to tear with one hand, it’s neater looking, and it’s harder for cats and kids to unroll.

Since I am by no means an expert on the subject of toilet paper etiquette, I thought it helpful and wise to consult experts on the subject.  According to The International Center for Bathroom Etiquette, the proper way of hanging the roll is whichever way your wife wants to hang it, but if you don’t have a wife then it’s up to you to decide which way to hang it until you get a wife or someone else to impress.  Emily Post’s Etiquette Daily asserts that toilet paper orientation is a matter of preference rather than one of etiquette, so hang your toilet paper roll any darn way that pleases you.

As for my boyfriend and myself, we’ve reached a truce on the issue: whoever replaces the roll of toilet paper is the one who determines which way that particular roll will hang (I guess this means I’ll be changing a lot of rolls).  After all, why should there be a fuss over something as inconsequential as toilet paper? 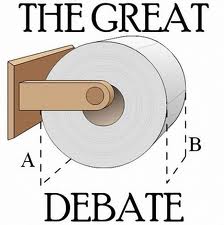