Why do we still use Roman numerals?

I remember first being introduced to Roman numerals in third grade and hating the Ancient Romans for inventing a crazy number system I thought was intended to torture kids for two millennia.  Sometimes I wondered whether that system hung around just as a tool for teachers to use to keep students in line.

Thank goodness we got Arabic numerals several centuries after the Roman Empire collapsed, and by the 14th century they became the standard over Roman numerals.  Or have they?  Take a good look around you.  Does your clock or watch have Roman numerals?  How about the chapter numbers in the book you’re reading?  Or sporting events like the Olympics or the Superbowl?  Wouldn’t it have been easier to write Superbowl 46 instead of Superbowl XLVI?  (Note: I confess I had to use an online Roman numeral converter because I get lost with any number higher than XXXIX.)

I can accept that older European edifices display Roman numerals because that was the number system of the day, but what about American structures?  Americans aren’t descended from the Ancient Romans and the roots of the United States go back to England and not to Italy.  Arabic numerals were the norm in the Thirteen Colonies, so explain the appearance of Roman numerals on American buildings, on coins, and on the front page of The New York Times (take a moment to examine the volume number).

For whatever reason, Roman numerals are somehow seen as the classic (no pun intended) number system, the educated system, the elite system.  They don’t seem as ordinary as Arabic numerals.  Movie series that have more clout carry Roman numerals (i.e., Star Wars has Episodes I through VI) whereas mediocre movie series use Arabic numerals (i.e., Scary Movie has films 2 through 4 with 5 set for production).

It would be nice to have numeric literacy among everyone, the old and the young, the rich and the poor.  Why can’t we make things simple for all and promote just one number system, the Arabic numeral system? 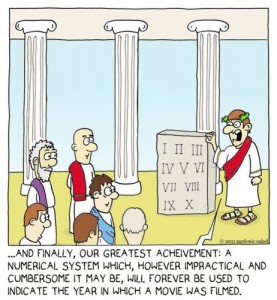