Why do we attribute Caesar salad to a Roman emperor?

With the dog days of summer here, you might be like me and seek some lighter, cooler fare at the kitchen table.  After all, who on a hot day wants to eat heavy, greasy, sink-in-your-stomach food that will bloat your gut and make you go straight down to the bottom of the pool?  (Well, I can think of at least one exception, but the guilty shall remain nameless.)  A lot of us are reaching for cool, crisp, quench-satisfying veggies, which often means salads.

One of my favorite salads is Caesar salad–crunchy lettuce and croutons with tangy dressing and Parmesan cheese.  It’s simple, yet satisfying.  While eating this delicacy in the past, different thoughts have crossed my mind, such as “I’m eating a recipe that dates back to antiquity” or “What does this salad have to do with Julius?”  To my surprise (and maybe yours), the salad has nothing to do with Ancient Rome or its infamous emperor.

The Caesar salad is actually is named after Caesar Cardini, an Italian chef who immigrated to the U.S. and opened a restaurant in Tijuana, Mexico.  As the story goes, when Cardini was running out of ingredients at his restaurant on July 4, 1924, he put together a salad from his remaining food inventory.  Thus the Caesar salad was born.

Let’s be honest, though.  When we think of Caesar salad, we’re always going to think of Julius Caesar, not Caesar Cardini.  There are just some names that are associated with one person and one person only.  Caesar, Michaelangelo, Galileo, Rembrandt, Elvis, Marilyn, Cher, Beyonce, Oprah, Bono.  If you ask me, I think it was Cardini’s bad luck that he shared a name with a huge historical figure who wrongly keeps getting credit for one of the most widely known dishes around.  In all fairness to Cardini, the Caesar salad should be renamed the Cardini salad (even if it doesn’t fall trippingly off the tongue).  Why shouldn’t this wrong be righted? 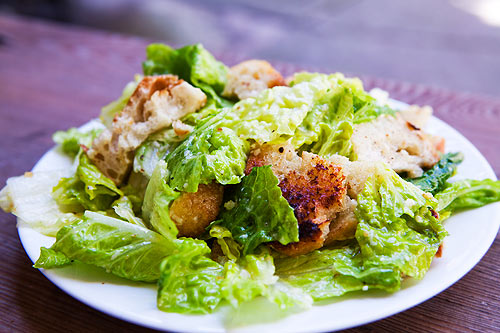