Why is cursive handwriting falling by the wayside?

Once upon a time, during the Middle Ages, books were expensive.  Like, crazy expensive.  That’s because monks copied manuscripts by hand, and in order for monks to copy manuscripts, they needed to have good penmanship.  After all, who wanted a book with sloppy handwriting that couldn’t be deciphered?

Then along came the Gutenberg Press, which unemployed a lot of religious scribes, but made books easily publishable, cheaper, and more accessible.  However, people still needed to have good penmanship because not everyone had a Gutenberg Press in their house to use for letter writing.  Children were still taught how to write in cursive in order to write letters to family and friends.  This happened roughly through the mid-1990s, when long-distance phone calls continued to be costly and e-mail wasn’t widely used among the masses.  As a kid, I remember my mother writing letters to her family in Europe because it cost around $90 an hour (and that’s in 1980s dollars) for an international phone call.

Then came computers and the Internet along with e-mail for all and social networking sites.  And let’s not forget cell phones and texting.

We no longer need to write anything by hand since practically everything is typed out on a keyboard or thumbed into a hand-held device.  The only time we really need to handwrite something is our signature on documents or in the store when we use a credit card.  Since so many things have gone techno, schools are no longer requiring teachers to devote time to cursive writing and penmanship, focusing more on keyboarding and computer skills instead.  This is the reason Generation Y (and I’m sure others to follow) have such sloppy, unrefined signatures that are more often printed than written in cursive.

The negatives of not writing in cursive?  Printed signatures are easier to duplicate than cursive, which means a greater potential for identity theft.  People who aren’t taught cursive will have a difficult time reading family heirlooms and other older documents since they are unfamiliar with handwritten script.  Fine motor skills that come with cursive writing won’t be developed, causing the brain to function differently.  Furthermore, we’ll have one less way to exhibit our personalities without the distinct style of our handwriting.  Can you imagine The Declaration of Independence without John Hancock‘s large, strong, and bold signature?  Can you imagine typing or texting when there’s no electric or battery power?  Why can’t we be versatile in knowing both typing and cursive writing? 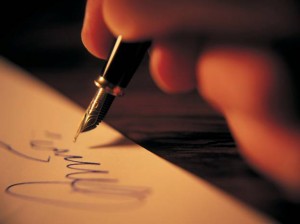