Why has modesty become a thing of the past?

I’m not a prude nor do I consider myself to be a highly conservative person in dress or beliefs.  Is it just me, though, or has modesty all but disappeared in our society today?  Where have the days of respect and decency gone?

You see it everywhere, from the local to the national scene, from children to young adults.  People are dressing badly and behaving even worse.  6-year old boys are quoting the song “I’m Sexy and I Know It” to girls in art classes; teenage girls want to wear prom dresses that show too much skin and leave little to the imagination; and adults are watching TV shows with titles such as “GCB” and “Don’t Trust the B____ in Apartment 23.”  I remember my father telling me that during his childhood, kids weren’t allowed in the cinema to see Gone With the Wind due to its famous last line.  Now we have words spoken on primetime that would probably make even Clark Gable blush.

Earlier decades were by no means perfect and had their own problems, but one thing they did have was public modesty.  Women didn’t wear skirts or shorts that barely covered their butts; men didn’t wear tattered jeans and grungy old T-shirts when dining in a restaurant.  Children were taught to be nice to each other and to respect adults.  Woe to the kid who dared to talk back or utter a curse word at home or in class!  In contrast, teachers today are scared to reprimand a student because behind every unruly student is an even more unruly parent ready to use a parent-teacher conference as a personal assault on the educator. 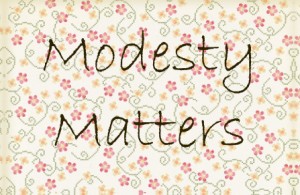