Why are adults scared of making art?

When I was a kid, I was an artist.  Well, maybe not an artist according to most people’s definition of the word, but I was artistically creative.  I had fun in elementary and middle school art classes, making my own interpretations of whatever was on the agenda for that week.  I painted, I drew, I worked with clay.  Heck, I even did decoupage, copper repousse, and mosaic work (out of real tiles, no less).  Then came high school and its emphasis on preparing for college: AP courses, PSATs, SATs, ACTs, and other abbreviated things.  Arts and crafts were pushed to the back burner until they all but disappeared from the horizon.

Recently for some time, I toyed with the idea of doing something creative, something artistic.  I looked at the different scenes I passed by on Washington State roads, imagining my artistic rendering of them on paper or canvas.  After taking time to muster some courage, I bought a set of watercolors, brushes, and paper.  It took me a little more time to get the guts to break open some colors and get down to actually painting.  I was going to re-create in watercolor a grove of evergreens in the middle of a wheat field with a gentle blue sky above.  It was going to be beautiful.  It was going to be amazing.  It was going to be crappier than anything a 6-year old can paint.

What causes most adults after a certain age to become afraid of making art?  Maybe it’s all about perfection.  It has to look good, and if it doesn’t come out looking perfect, we get frustrated.  When we were kids, we weren’t worried about producing the perfect work of art.  All we were concerned about was having fun making it and being pleased with whatever was the end result.  So what if our drawing of a horse didn’t look like a real horse?  The horse we drew was real enough to us.  It had personal meaning, and we were happy with that.

After my first attempt at watercolor, I wanted to give my more artistically-gifted boyfriend my paint set, but he refused to take it.  He said I might want to have another try or that we might want to take a painting class together sometime in the future.  I don’t know about that.  I’m thinking of giving art-making another try, but the next time it’ll be with pastels.  If that doesn’t work out, there’s always Spirograph.  Why do we have a hard time learning the lessons kids can sometimes teach us about art? 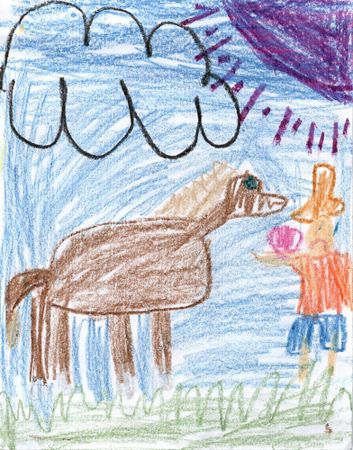