Why would anyone want 24 hours of sunlight?

If you’re in the Northern Hemisphere, summer has finally and officially arrived with warmer weather and plenty of sun.  Depending on your latitude, you might be getting more than your fair share of rays and Vitamin D, like 24 hours’ worth.

For over a decade, I’ve been captivated by two towns in particular that lie north of the Arctic Circle: Inuvik and Tuktoyaktuk in Canada’s Northwest Territories.  What makes these two towns about 100 miles apart from each other so interesting to this New York girl?  In a word, plenty.  First of all, these towns have Inuit names that are exotic-sounding to an English-speaker.  Second, they’re so far north to someone like me who’s lived in the mainland U.S. all her life and who at one time thought Boston was far north.  Third, and this is the most fascinating factor, they get 24 hours of sunlight in the summer.

The idea of having 24 hours of uninterrupted sunlight is beyond my imagination and probably beyond that of others as well.  To have the sun shining at 2 a.m. just like it’s 12 noon goes against the norm.  Hit the sack at 11 p.m. and the sun is still high in the sky; get up at 7 a.m. and it’s still there shining away.  No need for indoor lighting or car headlights.  Want to start a baseball game at 4 a.m.?  No problem.  You can do anything you usually do in the sun at any time of the day.

Given the choice, though, would anyone actually opt for an endless day without any period of night?  I love the sun and am glad to live in Eastern Washington State which gets 174 sunny days a year on average, but I think it would drive me nuts to go to bed with the sun still out, even with light-blocking shades.  I wonder how people living with 24 hours of daylight adjust their sleep schedules.  Maybe it’s possible to have too much of a good thing?  What I wonder most of all is why would anyone want 24 hours of daylight in summer when it means getting 24 hours of darkness in winter? 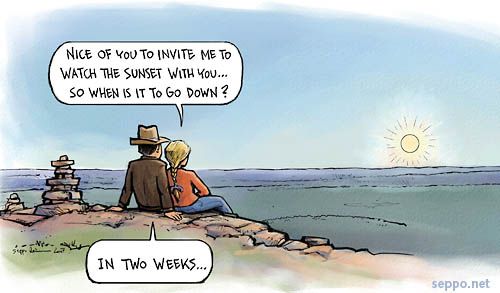