Why all the fuss over vampires?

It seems like the popularity of vampires goes up and down with the times, and lately it’s on the upswing again.  You can blame Stephenie Meyer’s Twilight books and the movies based on them starring young heartthrob Robert Pattinson.  Thanks to the Twilight series, TV shows such as True Blood and The Vampire Diaries (both of which are based on books) have become favorites with people craving more stories about bloodsuckers.

What is it about vampires that captures the imagination?  Depending on which story you read or which movie/show you watch, vampires have various characteristics: pale skin, cold to the touch, blood-drinking, harmed by the sun, coming out only at night, sleeping in coffins, or not sleeping at all.  Each adaptation creates and develops its own set of traits and vampire folklore.

A newer characteristic that the recent adaptations have is sex appeal.  The sex factor is unquestionably a big element in selling vampires today along with eternal youth.  Edward Cullen and Damon Salvatore, young-looking and handsome, are hot with mesmerizing eyes and perfect hard bodies, making any straight woman fantasize about them regardless of her age (note the Twilight Moms).  Let’s be honest–would we really be interested in these books and movies if they didn’t involve sexy guys with beautiful babes in romantic relationships oozing with sexual undercurrents?  Probably not.  The guys are so steamy that their bloodsucking habit is easily overlooked, even by their human girlfriends.

Sexiness aside, what really makes vampires so fascinating?  Somehow I don’t think the blood issue and paleness contribute to their attraction.  There’s one trait of vampires that permeates all the stories: immortality.  Unless they’re killed (with a stake, sunlight, or whatever else), vampires can theoretically live forever.  Wouldn’t it be something to live beyond what is humanly possible, to witness different eras, to accumulate knowledge?  Vampires are an embodiment of our desire to continue living and experiencing new things.  Why wouldn’t anyone want to see the future centuries from now? 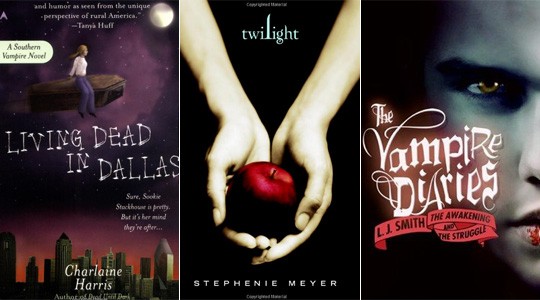