Why can’t we sometimes be less dependent on electricity?

Last weekend a storm struck the Inland Northwest so hard that some areas, including mine, had their electric knocked out and were left in darkness.  It happened around 8:30 in the evening when most people were home relaxing and getting ready to start a new week.

It wasn’t so bad being without electric at first.  I got out the candles so we could have some light.  Then it hit me–I had one load of laundry in the dryer and another in the washer.  If the electric wasn’t restored soon, I would have to re-wash both loads because of a funk they were likely to develop from the dampness.  No biggie.  Just a little extra work.  My husband, on the other hand, had things a little rougher than me.  As an Internet junkie, he almost immediately experienced withdrawal symptoms because even though his tablet is battery-operated, the modem and router, which the tablet needs for an Internet connection, are not.  Speaking for myself, I was fine without the Internet and the TV, but I what I found difficult was not having hot water in which to shower, since our on-demand water heater is powered by electric, and not having sufficient light from the flickering candles to be able to read.

How did we become so reliant on electric?  Less than 150 years ago, people had no electric in their homes.  No electric for basic things like indoor lighting and cooking.  Candles and oil lamps were used as light sources, and wood fires helped prepare and heat meals.  There were no refrigerators to keep food fresh; salting and smoking fish and meats were commonly practiced for food preservation.  Needless to say, there were also no microwaves, DVD players, or air conditioners.  Somehow, though, people managed to live their everyday lives (albeit with more work and difficulty) without electricity whereas nowadays we’re left paralyzed.

Don’t mistake me–I really do like electricity and all the inventions functioning on it that make our lives easier and convenient.  I simply think that every so now and then it might be a good idea to unplug, not just from our computers and cell phones, but also from our other electric-operated gizmos, if only for a couple of hours.  Light some candles, toast some marshmallows or hot dogs over an open fire, ride a bike, read a book aloud to others.  Gain some insight into how things were done before as well as an appreciation for how things are done now.  Why can’t we sometimes, for a short while, unplug from the present and plug into the past? 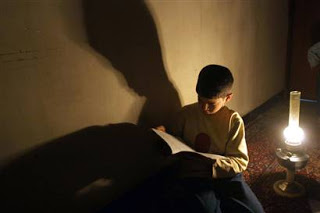