Since the 4th of July holiday is upon those of us who are in the U.S., I thought it would be fitting to write a post with a patriotic theme.  Aside from the fireworks and barbeques, there are other things we do as Americans to honor our country, such as singing the national anthem and saying the Pledge of Allegiance.

I don’t know about the rest of you, but as a kid growing up in New York, I had to say the Pledge at the beginning of each school day.  In all honesty, I didn’t think too much of it at the time.  It was a routine: at the end of the morning announcements over the PA system, I and all of my classmates stood up with hands over our hearts to recite the Pledge while we faced the flag that hung in a corner of the classroom.  I said the words mechanically, not giving much thought to their meaning.

I really started thinking about the Pledge nearly 10 years ago when I began to teach high school.  A good number of the students in my 9th grade homeroom class said the Pledge halfheartedly or not at all.  Some didn’t even stand up for it.  At first I was surprised by their behavior, then I became angry to the point that one day I gave them a mini-lecture about standing up and saying the Pledge.  I remember telling them that saying the Pledge was the least they could do to honor their country as well as the people who fought and died for their freedom, the freedom that allowed them to be there in class to receive the education people in other countries weren’t fortunate to receive.  I saw those students rolling their eyes at the crazy teacher who was making them do something they didn’t believe was important.

I think it’s sad that some among the younger generations have such a lack of respect and patriotism.  I’m not saying my generation was perfect as kids, but all of us, even the troublemakers, had respect for the Pledge and didn’t make a fuss about saying it.  Why aren’t young people today being taught good citizenship and given a sense of patriotism? 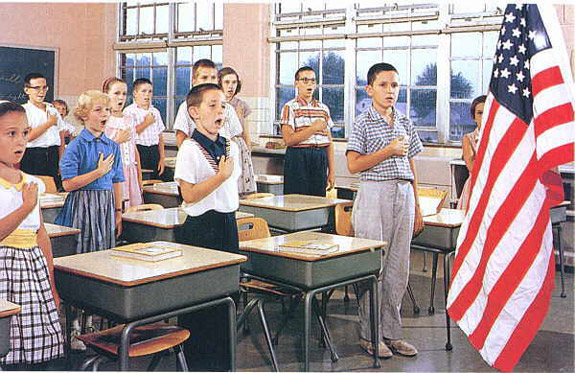