Why are so many people wary of the number 13?

If you ask me, I think the number 13 has gotten a bad rap.  What makes this number so scary to so many?  After all, it’s just a number like any other, right?

When most people think of the number 13, they often associate fear and bad luck with it.  Friday the 13th is long believed to be a day when anything and everything bad can happen.  It certainly was such a day for the Knights Templar: their Grand Master and 60 senior knights were arrested in Paris by King Philip IV of France on Friday, October 13, 1307.  Apparently, Phil wasn’t thrilled that the Knights didn’t want to loan him more money since he already owed them too much, so he had a fit and charged the Knights with heresy and homosexuality.  This was the beginning of the end for the Knights Templar, thousands of whom were arrested, tortured, and put to death.

Some people are so scared of the number 13 that they’re considered to have a phobia: triskaidekaphobia.  Because of this, some buildings don’t have a 13th floor (12a sometimes substitutes for it), some hotels don’t have a Room 13, and some planes don’t have a Row 13.  There are those who even believe in a superstition, after Christ and the Last Supper, that if there are 13 people dining together at a table, one of them will die (there were 12 apostles plus Jesus, who was crucified).  President Franklin D. Roosevelt, for instance, invited his secretary on occasion to join a gathering to make 14 at the dining table.

What’s interesting is there’s no logical or scientific proof that 13 is an unlucky number.  Good things have happened on Friday the 13th, I’m sure.  Unfortunately, I can’t tell you any of those good things that have taken place because no matter how much I researched, I kept finding information on all the bad things that have occurred.  Despite this, I still feel we shouldn’t diss the number 13.  It’s a number that should be respected like any other.  When you think of it, why wouldn’t anyone want to get a baker’s dozen (13) of bagels rather than a regular dozen? 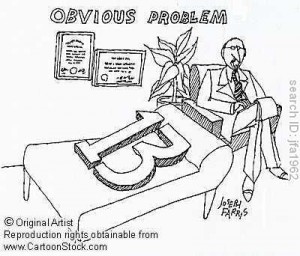