Why are people so shocked/appalled/offended by a woman breastfeeding?

It’s hard to believe that something as natural and as old as the human race can stir such controversy.  Maybe it’s just me, but I have difficulty in understanding what the fuss about breastfeeding in public is all about.  A baby is hungry, the mother feeds her baby with her milk.  Simple problem, simple solution, so you’d think.

Apparently, even the partial view of a human female breast in the non-sexual act of breastfeeding an infant is enough to make some people squirm or accost the nursing mother, shaming her to feed her child in bathroom stalls or store fitting rooms even though every state in the U.S. permits women to breastfeed in public.  Recently, the issue of public breastfeeding has been raised yet again when pictures of military women breastfeeding in uniform surfaced on the Internet.  Let’s face it: the real issue isn’t women breastfeeding; it’s the breast itself.

A woman’s breast, especially in Western cultures, is a body feature that has become highly sexualized.  It’s more often associated with intercourse than with breastfeeding.  We’re so bombarded with images of women in sexy outfits accentuating breasts that it’s sadly more common and acceptable to see Victoria’s Secret models scantily clad than it is to see women breastfeeding their children.  Even during the medieval period, which was a lot more conservative than the present time, it was perfectly normal for a woman to breastfeed her baby in church of all places.  That doesn’t say much about the so-called progression of society.

What’s wrong with people acknowledging that the breast has dual purposes?  There doesn’t seem to be a problem accepting that the penis has both sexual and excretory functions.  We don’t hear any commotion over men exposing their appendages when they’re standing at urinals.  There’s nothing sexual about a man urinating just as there’s nothing sexual about a woman breastfeeding.  Why can’t people just get over themselves and let feeding babies feed? 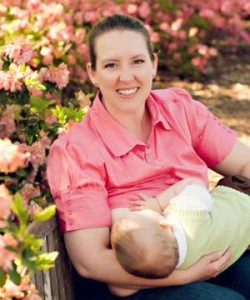