Why can’t we send American politicians back to kindergarten?

Unless you’ve been completely unplugged and off the grid for the past week, you’re probably aware that the almighty United States of America, a stronghold of democracy and one of the wealthiest nations in the world, if not the wealthiest, has shut down its government because politicians can’t agree on how to fund it.  Roughly 800,000 federal workers have been furloughed, and they don’t know when to expect their next paycheck.

I ponder over those wonderful politicians (not) working in the Senate and the House of Representatives in Washington, D.C.  I toured the nation’s capital several weeks ago with my husband during our honeymoon, and a few things stood out to me.  It’s very easy to pick out who’s who–government employees are attired in suits and dresses, tourists are dressed casually, and menial workers are clothed in uniforms.  The government buildings, such as the Capitol and the Library of Congress, are among the most beautiful and well maintained I’ve seen in this country and feel so far away from the nearby lower income neighborhoods.  There is a sense of self-importance among the government employees, even among those young unpaid interns who are all over the place and there only because of family connections.

Being in those beautiful buildings so far removed from the rest of ordinary society, the politicians can easily forget how the regular schmo lives.  They’re in their own little bubble on Capitol Hill with excellent cafeteria food prepared by experienced chefs, plenty of vacation time, great healthcare and benefits, and a paycheck that’s guaranteed, even when the government is shutdown.  I suppose it’s difficult for them not to turn into spoiled brats who are more concerned about themselves and their own egos rather than the people they’re supposed to serve, the people who elected them into their positions of privilege.

Most of us schmoes, including myself, have to go through job training that teaches how to conduct good customer service, not only with the people we serve but also with our co-workers.  We are told that we need to respect each other, to listen, and to compromise.  Aren’t these things learned in kindergarten?  Aren’t we taught to be nice to each other, even if we don’t like someone?  Aren’t we taught to listen to each other?  Aren’t we taught to reach an agreement with each other over toys and other things?  If you ask me, all politicians should go through required yearly training that reminds them to get along with each other and to compromise.  They need to re-learn the basics taught in kindergarten.  Why can’t politicians actually do their job and do right by their constituents? 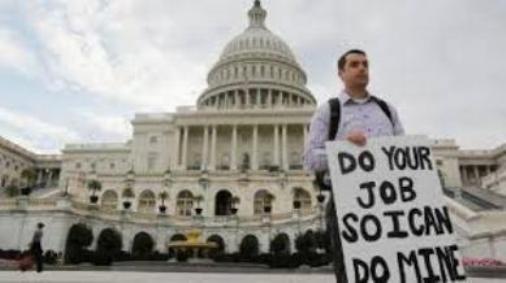