Why do we make excuses?

Hi, I’m Ellen.  And I’m an (occasional) excuser.  When I make excuses, it’s usually for things I don’t enjoy doing, like exercising.

My first excuse for not exercising was that I work evenings.  Everyday.  So naturally, it was too late and I was too tired to exercise at the end of the day.  Of course, I couldn’t exercise in the morning before work because that would make me sweat, and if I sweat, I would have to shower, and if I shower, I would need to wash and air dry my hair which takes a bit of time, more time than I’d care to give before going to work.  The next excuse was that the track in the nearby fitness center was inadequate, and I hate staying in one place walking on a treadmill while watching some stupid TV show or another new world crisis on CNN.  Well, a new fitness center was built with a great indoor track open late into the evening, so I had to get my butt to the track until I invented a new excuse–I’m not good at exercising alone and need a walking partner.  Then I got a walking partner, someone to whom I was accountable if I didn’t show up for our nightly walks.

Today, my co-worker asked me how my exercising with my walking partner was going.  I was put on the spot.  I searched my mind desperately for an excuse.  My partner is busy with her college courses until April, so she doesn’t have the time to walk with me (this is the truth, by the way).  Then it all came tumbling out: “I can’t make any excuses!  I just don’t like exercising and I can’t do it alone!  I need to exercise with someone or else I can’t get myself to do it!  There!  I said it!”

I don’t know what compelled (and sometimes still compels) me to keep making excuses.  I suppose like many others, I don’t want to admit, even to myself, that I’m lacking in something.  When we make excuses, we’re telling ourselves that it’s really okay we haven’t done something we should have done.  It’s a justification that makes us feel less bad about our shortcomings.  Let’s face it–it’s sometimes hard to admit that we’re not perfect or we’re lazy or we just don’t want to do something.  We need to boost our self-worth from time to time, and excuses help us do that.

There are those, however, who feel we make excuses because we enjoy suffering and complaining about our lives (really?) or because we want to protect ourselves from failure.  I’m a little skeptical about the former explanation but can buy into the latter.  Fear, especially the fear of failure, is a powerful force, and speaking for myself, I suppose I’m afraid of feeling a little embarrassed when people see that I’m not exercising even though I say that I will.

Now that I’ve explored why we (or at least I) make excuses, I now wonder why it’s so difficult to stop making excuses? 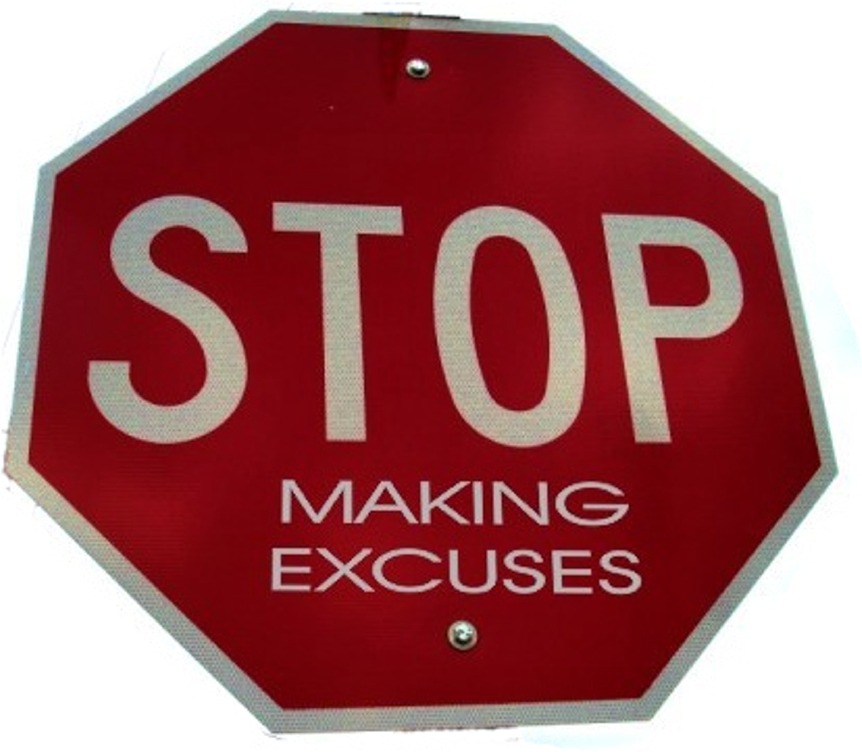