Why is it so difficult for many of us to “unplug”?

Everywhere you go nowadays, people are texting on their cell phones, checking the Internet on their smartphones, or writing e-mails on their tablets.  We’re so plugged into our electronic devices that it seems like we’re more virtually connected to each other than we actually are in the flesh, face-to-face.

For some, the idea of spending a weekend or even one day unplugged can cause symptoms akin to a panic attack.  Like a caffeine addict looking forward to the morning’s first cup of coffee, the anticipation of receiving an e-mail or a text does something to us and to our brains.  We need that information high, that high of being in the know rather than in the now. I even tease my boyfriend that he can’t stay away from his smartphone for too long since he’s often checking it when we’re together (in his defense, he’s getting better about it).

We’ve gotten so used to the electronics and the distractions that our hyperactive, multitasking selves wouldn’t know what to do in the absence of all the technology that regularly surrounds us.  Throw us in a field in the middle of nowhere with nothing but the sound of the breeze and the sight of tall grasses swaying and we’d probably be itching to check our e-mails.

It appears that we’ve forgotten what it’s like to live in the moment, to appreciate the simple things around us, to enjoy the actual company of others as opposed to the virtual.  According to some neuroscientists who used themselves as subjects, it can take several days or longer to let your mind decompress from overstimulation, but the benefits can be great: better cognitive function, less stress, and contentment.  If unplugging every so now and then is so beneficial, why aren’t more of us doing it? 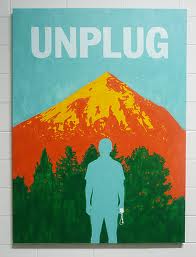