Why do women feel pressured to wear makeup in Western cultures?

It’s a rite of passage, one of the doors to adulthood for a number of teenaged girls in the United States and other developed nations in the world: wearing makeup.  I remember turning 13 and starting out sparingly with just a bit of purple eyeshadow, a few brushstrokes of blush, and a delicate pink lipstick.  As time and acne progressed with puberty, I delved deeper into the world of cosmetics, using a liquid foundation and pressed powder to cover my imperfections in addition to applying eyeliner and mascara to bring out my eyes.

Several years ago some famous women, including actress Sophie Marceau, made headlines when they appeared on the cover of the French Elle magazine, and the response to their going au naturel was overwhelmingly positive.  More recently, Kathy Lee Gifford and Hoda Kotb received national attention for doing The Today Show without wearing makeup.  They were seen as courageous for going on live television with their true faces.  People were even thrilled to see Snooki’s real face without all the layers of makeup and thought she looked pretty good.

In my opinion, our present culture has domesticated us to believe that a woman with makeup is beautiful while one without makeup is not, just as it has domesticated us to believe that a man with makeup is gay while one without makeup is straight or “normal” (FYI– “metrosexuals” are stylish, straight men who often wear makeup concealers to hide blemishes).  We’ve been exposed to images of “painted” women in our culture over and over since infancy that we no longer think through what’s acceptable and what isn’t.  We just know what’s acceptable because it was programmed into us.  If things were reversed, and men were the ones who wore makeup and women were the ones who didn’t, would we think women look less attractive?

Judging from the response to female celebrities who have dared to go bare, it seems like there is increasing acceptance of makeup-free women.  Maybe people like seeing the real person rather than the made-up one.  And for the record, I still wear makeup, although I’ve discovered a happy medium.  I no longer cake up my face with foundation, but I do use some subtle colors to enhance my eyes, cheeks, and lips.  However, I do occasionally go out “naked” and show my real self to everyone and to myself.  Why not be ourselves and comfortable in our own skin? 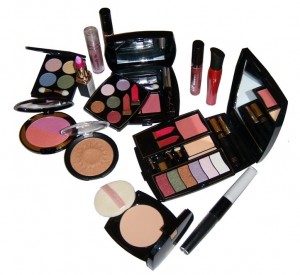