Why do you never hear classical music played at high decibels?

For those of you who live in townhouses or apartments like yours truly here, you probably hear things going on in your neighbor‘s place from time to time.  Sometimes you’ll hear things like phone conversations, the TV, or loud nocturnal activities (personally, I could do without the last one).  And sometimes you’ll be subjected to your neighbor’s taste in music, like I was this morning as I pulled the covers over my head in an attempt to sleep despite the booming bass that still penetrated my ears.

I guess a lot of people equate classical music with things that are old, quiet, and boring.  It’s not a kind of music that many expect to be loud enough to raise the roof.  Oh, what a misconception!  In its time, the music we now consider “classical” was pop music.  And some of its vibrations could physically be felt across a room.  Think of Wagner’s Ride of the Valkyries, Tchaikovsky’s 1812 Overture, or Handel’s Hallelujah Chorus from The Messiah.  Those are some seriously booming pieces!  Even think back to those Bugs Bunny cartoons you watched as a kid (or still watch as a big kid).  The classical music played in the background is almost always loud.

In my humble opinion (and it’s ever so humble), if I have to hear my downstairs neighbor booming music, it would be a refreshing change to hear the sound of a string bass than an electric bass, to hear something with a classic rather than a pop sound.  Why can’t people see that classical music is just as cool and booming as other musical genres? 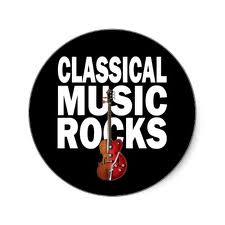