Why does positive energy from others help the sick?

Not too long ago, my mother had neurosurgery on her neck and spine.  It sounded scary and it was.  My mother isn’t one who normally panics about things, even big things, so when she openly admitted to me that she was scared of going through the surgery, I was worried.  I was so worried that I even asked my friends and other people I know to send my mother good vibes and to keep her in their thoughts.  One friend of mine, who’s deeply religious, even told me, “You can say the word, ‘pray.'”

Maybe the power of positive energy, of good thoughts and wishes, is helpful to those who are sick because it gives solace and peace of mind to know that you’re not going through something alone.  And that positive energy can be viewed differently by different people.  To some, it’s the power of God, a Supreme Being, or a Life Force that intervenes and helps those in need.  To others familiar with New Age beliefs and holistic medicine, it’s the power of nature and the universe bestowing their healing properties.  Whatever your personal perspective, at the bottom of it all, it’s about people directing their positive energy toward someone who can use it.

Doctors can cut a person and fix him or her up, but healing and recovery is more than just about the physical.  There’s an element involved that goes beyond empirical evidence.  It’s not tangible and plays just as great a role in mending a person as medicine and chicken soup.  Positive energy and a good attitude help heal the body as well as the mind.  And we can direct positive energy to ourselves or to others in both times of sickness and health.  Why can’t we all promote some positive energy every so now and then?

And if you were wondering, the positive energy from everyone helped my mother–she’s recovering well after her surgery. 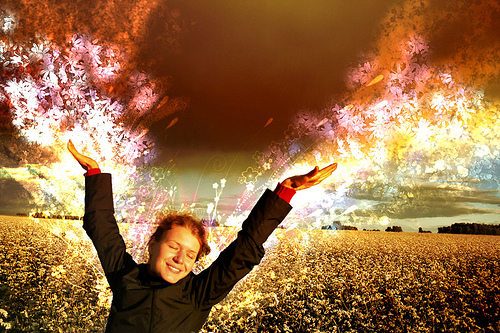