Why are motor vehicle bureaus located in the seediest parts of town?

After getting married not too long ago, I’m going through the oh-so-fun process of changing my last name to my husband’s name.  Social Security, banks, credit cards, doctors’ offices, etc., etc.  While I was waiting in line to update the name on my driver’s license, it struck me that no matter which state I’ve lived in, motor vehicle bureaus tend to be located in the worst parts of town where all the dregs of humanity congregate.

Sometimes they’re in old shopping malls, indoor or outdoor, long discarded for their intended purpose.  Sometimes they’re on the other side of the tracks, quite literally.  One motor vehicle bureau I visited in Pennsylvania was located right next to a set of noisy, active railroad tracks.  Sometimes they’re in once prosperous industrial areas that have fallen to decay and nature.  The common denominator, though, among all the bureaus I visited is that they’re all in rundown sections that you normally (and hopefully) have no business being in other than taking care of issues related to your driver’s license.

If you ask me, government agencies like the motor vehicle bureau are probably situated in the worst parts of town because money that could be applied to higher rents in better, safer parts are being designated for government waste, such as testing the rate of ketchup flow (I kid you not).  It should come as no surprise that the government wastes a heck of a lot of our hard-earned tax payer dollars and gives us few things that can actually be of use.  Rather than fund wars we have no business meddling in, the government should do something more productive and worthwhile, such as establishing better (and cleaner) offices in better environments.

Somehow I have a hard time picturing people like Donald Trump and Julia Roberts going quite literally to the wrong side of the tracks just to renew their driver’s license.  Or could it be that there are secret motor vehicle bureaus accessible only to the super-rich or super-famous hidden in the decent parts of town?  Think about it.  When was the last time you’ve heard about some celebrity waiting in a dumpy government office for their driver’s license?  What I’d like to know is why can’t the government simply get its act together and put our money to actual good use? 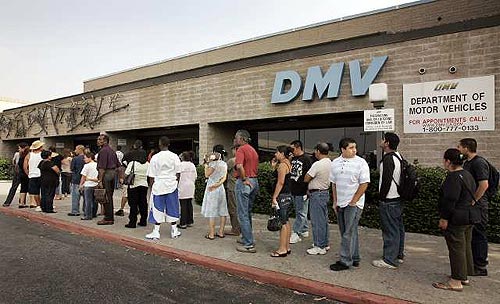