Why do Americans have a love affair with the British Royal Family?

In modern times, a large number of Americans seem to love the Royal Family of Britain.  Queen Victoria was the namesake of the Victorian Period that stretched its styles and values across the Atlantic to America.  A twice-divorced American woman, Wallis Simpson, was so enthralled by British royalty that she married King Edward VIII (you know, the one who had to abdicate his throne for marrying a divorcee).  Of course, who didn’t fall in love with Diana, the Princess of Wales, with her knock-em dead looks and a wardrobe to match (and her son and daughter-in-law appear to be following in her fashionable footsteps).  And now we have the huge shindig of the Diamond Jubilee, the 60th anniversary of Queen Elizabeth II‘s ascension to the British throne.

If you asked Americans a little over two centuries ago whether they were enamored with British royalty, the majority probably would have said no.  After all, King George III was taxing the Americans dry to finance the French and Indian War while giving them no representation in Parliament.  There was no love fest for Georgie when the Americans told him to shove it, had a little thing called the Revolution, and separated themselves from the monarchy and England to form their own independent nation governed by a president.

They say time heals all wounds and dulls the memory, and that’s certainly the case with Americans.  A couple of centuries later, so many think it’s cool that Britain has a queen and some hot-looking young royals.  American magazines slap pictures of the new Duchess of Cambridge on their front covers because everyone wants to see her latest outfit and hairstyle.  Newspapers headline the latest stories involving the Royal Family.  And don’t forget all those tabloids.  Americans just can’t seem to get enough of the royals.

Sure, the British Royal Family makes life more interesting with their ongoing soap opera of charitable acts mixed with some infamous antics, but would Americans like them as much if they had to finance their activities like the British public still does today?  I think one of the main unacknowledged reasons Americans like the British royals so much is that they don’t have to dig in their wallets to enjoy watching them.  If Americans make a ruckus over spending for the president’s use of Air Force One and other perks, imagine the outcry over paying for the upkeep of a group of people like the British royals. Besides, Americans have enough drama going on with their politicians.  Why do you need royals when you have politicians like John Edwards? 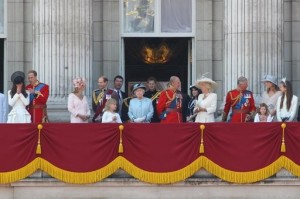